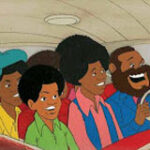 The Jackson 5 Complete Animated Series is coming to both DVD and Blu-Ray. The Jackson Five debuted on ABC on September 11, 1971 and was on the schedule until October 14, 1972. A total of 23 episodes were made by Rankin-Bass who were best known for Christmas specials like 'Rudolph the Red Nosed Reindeer,' 'Frosty the Snowman' and 'Santa Claus is Coming to Town' along with animated series for the Beatles and the Osmonds.

While the original recordings were used, none of the members of the group voiced their animated counterparts nor did Barry Gordy whose character was never given a name but was widely accepted as being the Motown head. The only person in the group's career that did voice their own character was Diana Ross and it was only done for the premier episode.