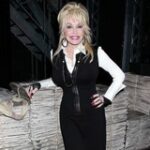 Our "Lost 45" pal Dolly Parton would have 'come out of the closet just a-flying' if she was gay. The country music star has been married to her husband Carl Dean for 46 years. He has chosen to stay out of the limelight during her career, leading to a lot of speculation about his marriage to Dolly.

The star has endured claims Carl doesn't exist, as well as allegations she is a secret lesbian. The 66-year-old is so secure in her marriage she is able to laugh it all off.

'I'm not gay. If I was gay, I would have come out of the closet just a-flying,' she is quoted as saying by New York Daily News. 'But if there's gossip going on, they're going to bring me into it. I've been married 46 years. I think people think that in itself is not normal.'