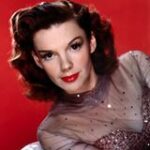 The 1939 "Wizard Of Oz" classic 'Ding Dong The Witch Is Dead' could end up being the biggest selling song in England this week. The Judy Garldna track took off in the UK following the death of former British Prime Minister Margaret Thatcher, who died on Monday from a stroke. Thatcher divided a national during her rule from 1979-1990, so much so that the Russians nicknamed her 'The Iron Lady'. Since her death, 'Ding Dong The Witch Is Dead' flew to number one on the British iTunes chart (presumably on a broomstick).