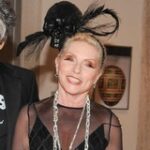 Debbie Harry never felt the "need" to have children. The 67-year-old Blondie front woman has never married but describes the band's guitarist Chris Stein as her life partner. Debbie gets frustrated when asked if she has regrets about not becoming a mother, as she feels she's given back to the world in other ways.

'I'm certainly not the only woman in the world who never had children,' she explained to The Edit. 'There are many reasons why Chris and I didn't. We were working very hard, we were happy and we didn't feel a need. And I always thought: there are a lot of children in the world. I didn't need to add to that, you know?'

Debbie doesn't let her age bother her and only occasionally worries about getting older. The positive star believes her life has been fulfilling. 'Sometimes I win, sometimes I lose. I just have to deal with it. What else can I do?' she laughed about ageing.