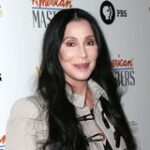 Cher would have loved to audition for The Voice when she was younger. The 67-year-old performed her new track "Woman's World" on the American talent show on Tuesday. It has been ten years since her last musical stage appearance and she is impressed with how quickly people are now rising to fame. 'Going on shows like this, this is an amazing thing. . When I first started, we played bowling alleys and roller rinks,' she told Entertainment Weekly. 'We didn't get to go on anything.'

The singer explained she graced the world's TV screens only after achieving stardom. 'We got to go on stuff when we were famous, but this is amazing, when you have actual people who have been in the business, been successful and want to help you,' Cher admitted. 'You can bypass a lot of trashy stuff.'

Cher and her late ex-husband Sonny Bono had their own The Sonny and Cher Comedy Hour show in the 70s. With big names appearing on the sketch show, Cher still can't believe how interested the public is in watching the unknown make it big. 'Sonny and I were already famous - we became famous in '65 and we didn't have the show until '72, and we also had a big valley there between the two,' she explained. 'That was more like, it was comedy and it was singing and we . didn't have people that weren't famous. People watched our show to see people who were famous doing sketches and . I don't know that a show like that would actually work anymore.'