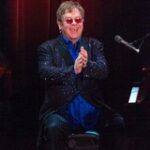 Sir Elton John could have "died at any time" during his recent health scare. The British singer has been forced to cancel his upcoming European shows due to appendicitis. He fell ill after a performance on Friday, with hospital scans showing he had an abscess.

The 66-year-old has opened up about his ordeal, which was worse than has been assumed. "I'm lucky to be alive," he told British newspaper The Sun. "I was a ticking time bomb. I guess I could have died at any time."