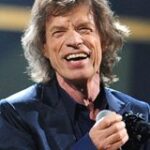 Mick Jagger turned 70-years old today and after 50 years still has the same job he had when he was 19. The lead singer of the Rolling Stones has spent the best part of the last 12 months celebrating the 50th anniversary of his band but today has his own celebration.

Jagger was born Michael Phillip Jagger on July 26, 1943 in Dartford, Kent, England. His father Basil was English but his mother Eva was Australia. Eva Scutts was born in Sydney. Her birth certificate was registered in the Sydney suburb of Marrickville in 1913. She died in 2000, Basil in 2006.