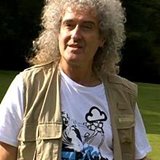 Brian May's cancer test has come back negative which is great news for the Queen guitarist. After a weekend where a misinterpreted comment led to British papers announcing an all clear for Brian May's cancer testing when the results were not known, we now have the definitive answer on the health of the guitarist. May has written on his site that his specialist had called and said "The result of your prostate biopsy is here, and we did not find any cancer cells."

Brian said he was relieved and celebrated in the studio with a cup of tea. "I know how to rock!" He went on to say that there are still some mysteries to solve but the worst possible outcome had passed. He also thanked fans for the overwhelming concern.

In the mean time, May and Roger Taylor are working on a Queen project, including a long forgotten track that Queen recorded over thirty years ago. According to May, it's great and is "crying out to be finally brought into the world." More indication that new Queen music could be coming this year.