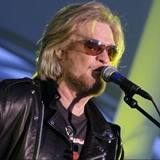 Daryl Hall of Hall and Oates is getting a second television series. The host of the long running "Live at Daryl's House" will be the subject of the DIY Network's "Daryl's Restoration Over-Hall" which will premier on Saturday, May 17th. According to the network's press release:

"Rocker turned-renovator Daryl Hall, best known as the co-founder and lead vocalist of the American musical duo Hall & Oates, is putting down his guitar and picking up a hammer to restore a quaint 18th century home in Sherman, Conn. The historic home hasn't been touched in decades-so Hall and his team of craftsmen have plenty of work to do before the one-bedroom home can shine again with 1780s charm."

Daryl has been a guest on "The Lost 45s" a few times, along with his musical partner, John Oates.