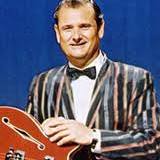 Arthur "Guitar Boogie" Smith, the multi-instrumental country musician who wrote the song that would become "Dueling Banjos" (later the theme from "Deliverance") died at his home on Thursday at the age of 93.

Smith was a very active composer with over 500 copyrights including his 1955 piece "Feudin'  Banjos" which he recorded with Don Reno. In 1972, the song was performed as "Dueling Banjos" by Eric Weissburg and Steve Mandel for the movie "Deliverance," going on to reach number 2 on the Hot 100, number 5 on the Country Singles and number 1 on the Adult Contemporary chart. At first, Smith wasn't given credit for the composition but, after filing a lawsuit, his name was added as its composer.