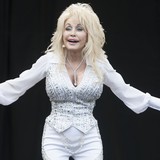 Our pal, frequent "Lost 45" guest Dolly Parton hopes she 'shines from the inside'. The 68-year-old music legend is known for having undergone numerous cosmetic surgery procedures. But although physical beauty is important to her, Dolly is most concerned with maintaining a positive way of being.

'I don't know about my beauty, I've spent a lot of money on that,' she laughed to Entertainment Tonight. 'I'm not a natural beauty... make up, BOTOX, collagen, and other nips and tucks or whatever, but I have a good attitude. I'd like to think I shine from the inside." Dolly is fuelled by others, as she finds humanity to be a constant source of inspiration. 'I just love life, I love people, I love to write, that's my gift, I love to sing,' she explained.

Dolly has been active in the entertainment industry since 1955 and she's churned out classic songs like I Will Always Love You, which was later reprised by late singer Whitney Houston to great acclaim. The country musician has an estimated net worth of $500 million and she sees no end to what can be accomplished in the remaining years of her life.