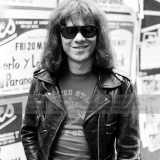 Tommy Ramone, the original drummer for The Ramones, has died at age 62 from bile duct cancer. Tommy Ramone was born Erdelyi Tamas in Budapest, Hungary. His Jewish parents were Holocast survivors after escaping the Nazis and relocating to Forest Hills, New York. Tommy became a record producer in his teens and worked as assistant engineer on Jimi Hendrix 'Band of Gypsies' (1970).

When The Ramones formed Tommy was recruited as the manager but became the drummer 'because nobody wanted to', Dee Dee Ramone once said. Tommy then played on the first three studio albums 'Ramones', 'Leave Home' and 'Rocket To Russia' and the live album 'Its Alive'. He co-produced the fourth album 'Road To Ruin' and return to producer the eighth album 'Too Tough To Die'. AS a songwriter Tommy wrote 'I Wanna Be Your Boyfriend' and co-wrote 'Blitzkreig Bop'. His production credits also include The Replacements 'Tim' and Redd Kross 'Neurotica'.