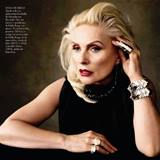 Clem Burke of Blondie says it may be all over soon for the band. Drummer Clem Burke has been with Blondie since the very beginning in 1975, so he should have a pretty good grasp on the future of the group. Burke talked to Vancouver's The Province, telling them that lead singer Debbie Harry has hinted that their current tour in support of Ghosts of Download may be their last.

'By the time we get to beautiful Vancouver, B.C., we will have toured Europe, played Glastonbury and done a number of big festivals in North America,' he told The Province. 'As for the rumours of the last tour, we've decided we'll live forever. But Debbie, is older than me and has hinted it could be time. Obviously without her, there is no Blondie.'

Harry just turned 69 making her the oldest member of the original group. Guitarist Chris Stein is 64 and Burke is 58. The three have been part of Blondie since 1975 although the band was apart from 1982 to 1997.

No matter what happens, Burke will stay busy. The man who was also a part-time member of the Ramones as Elvis Ramone, has played on many sessions for other artists and is a part of the new group the Empty Hearts with Elliott Murphy of the Cars, Wally Palmer of the Romantics and Andy Babiuk of the Chesterfield Kings.

Blondie are currently touring Europe, wrapping up on August 31 and have just one more date scheduled on October 3 at Harrah's Rincon Casino and Resort in Valley Center, CA.