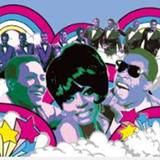 There has been no official announcement, but it appears that the TV special Motown 25: Yesterday, Today, Forever may be coming to DVD. The major clue is two new Amazon listings, one for a one-DVD/150 Minute version and one for a 3-DVD/450 Minute set. Both are listed with a September 30 release date via Time-Life.

Motown 25: Yesterday, Today, Forever is a 1983 television special celebrating the 25th anniversary of Motown Records starring some of the label's biggest stars. Of course, the big moment of the night was Michael Jackson's performance of Billie Jean which, for the first time, included his Moonwalk. The show was taped at the Pasadena Civic Auditorium on March 25.

The original three-hour show will fit fine on the single disc version, but what will be on the three-DVD set? There are performances from the night that didn't make the broadcast program and, especially, moments that couldn't be shown. The reunion of Diana Ross and the Supremes fell apart when Ross got upset that the other two members (Mary Wilson, Cindy Birdsong) walked next to her instead of behind her as they first walked upstage. Reports say that the action confused Ross and Wilson took over lead vocals along with the introduction of Berry Gordy. Performances of Baby Love and Stop! In the Name of Love were completely dropped as other stars rushed on stage to help finish Together.

When the show aired, that finale looked as if it was the way it was planned but it would be great, after all these years, if the entire performance made it onto the three-disc set. Hopefully, we will also see rehearsal footage and other special features on the deluxe set.