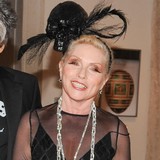 Debbie Harry says Blondie is a "do-it-yourself" kind of band. The singing sensation has fronted the punk group since 1974, and they're known for hits such as "Heart of Glass" and "Call Me."

Blondie took a break from the music world in the early '80s but reformed in 1997. Since they got back together they've been a regular fixture on the festival circuit, and yesterday took to the stage as part of BBC Radio 2's Live in Hyde Park in London, UK.

"You're talking about a totally different level of being part of the industry," Debbie explained to British newspaper Metro about how she handles gigs compared to contemporary stars. "I don't travel with six bodyguards. I don't have an assistant. I don't have hair and make-up people. We're a do-it-yourself operation. We're very home-grown and very tight. It's totally different.

"I don't have a bunch of side men and a music director someone has hired and teaches them the songs, and then five hours later I walk on stage and sing them. It's a totally different thing."

Comparing her entourage to Rihanna's, Debbie revealed she actually prefers to handle her own luggage over someone else being responsible for it.

"[Rihanna's] a stumbler, she falls a lot. I have had some weird experiences when I have given my stuff to people and they've lost it. I'm just taking care of business," she explained.

On the subject of musicians such as Miley Cyrus and Lady Gaga, the platinum blonde star dubbed them "show girls".

However 69-year-old Debbie doesn't see that as a negative thing, and actually admires what today's music stars are doing.
"I do appreciate the fact that Gaga is a real musician and I really adore that about her," she smiled.