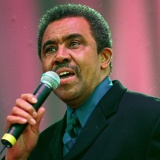 Additional reports on Twitter are saying that Ruffin has passed away; however, there is no confirmation from the family.

Ruffin, who is 75, hit big in 1966 with his first single for Motown, "What Becomes of the Broken Hearted," which went to number 7. He continued to chart with such songs as "I've Passed This Way Before," and "Gonna Give Her All the Love I've Got." His career was resurrected in 1980 when he returned to the top ten with "Hold On To My Love," written by the Bee Gees.