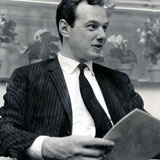 Vivek Tiwary, the producer of the upcoming biopic about Beatles manager Brian Epstein, has talked about Epstein's rise success as a young gay, Jew in a British working class town and how the pressure of that success finally killed him.

Tiwary's book 'The Fifth Beatle' was released in 2013 and will soon me released as a movie. The real story of Brian Epstein is about a gay English Jew in the 1960s'.

Tiwary has been working on the project for over five years and took years to earn the confidence of the Epstein family. 'It took years before Brian Epstein's closest friends and family felt comfortable enough to tell me of these stories. It is hard to imagine what it must have been like to be a gay Jew in the 1960s,' he admitted at his Fulton Street TED talk this week.

To understand Epstein's struggle you need to understand the attitudes of early pre-Beatles England. 'I'd mentioned that being gay as a felony,' Vivek said. 'It was so hard-core that two men holding hands walking down the street could have been thrown in jail'.

Tiwary suggests that the UK's ignorance of homosexuality at the time was the contributing factor to the death of Brian Epstein. Drugs were just the vehicle. 'Brian Epstein's doctors, who were the best in the world, were prescribing medication to him to cure him of his homosexuality,' Vivek said. 'Pills that would eventually contribute to his death at the young age of 32 from an accidental overdose of prescription pills'.

Epstein's life was also compounded by his background. 'Being Jewish, the anti-Semitism was like a way of life,' he said. 'Jews didn't work in the music industry. The music industry in the United Kingdom was run by folks like Sir Lew Grade and Joseph Lockwood. It wasn't run by people with last names like Epstein. You have got in Brian Epstein a 26-year old gay Jew running around a dirty old port town in the North of England who found a rock and roll band who were going to elevate music into an art form'.

The Fifth Beatle movie is still a work in progress.