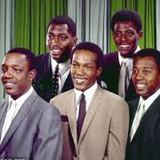 Move over "Motown: The Musical!" A couple of the groups that are portrayed in your show are about to hit Broadway in the flesh.

The Temptations and the Four Tops will team up for seven shows at the Palace Theatre in Times Square from December 29 to January 4.

This is a major opportunity for everyone involved. New Year's week is traditionally the highest grossing, most attended week of the year on Broadway and the promoters, LiveNation, are taking advantage of that fact by booking the groups into one of the larger venues on the Great White Way. The Palace Theatre has a capacity of 1,740, putting it just below the Gershwin (1,900), Lyric (1,829), New Amsterdam (1,801) and Broadway (1,761) theaters.

It also helps the Nederlander Organization, who owns the theater, by filling it for the week. According to the Hollywood Reporter, that venue has been empty since the Tupac Shakur show, Holler If Ya Hear Me, closed after a short run.