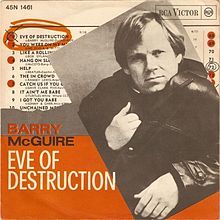 P.F. Sloan, the songwriting great behind classic singles like Barry McGuire's "Eve of Destruction" and Johnny Rivers' "Secret Agent Man," passed away Monday night after a short bout with pancreatic cancer, the musician's representative confirmed to Rolling Stone. Sloan, who was born Philip Schlein, was 70.

"Phil was a key element on the music that became the sound of the Sunset Strip. Phil was a true prodigy, signing his first record deal with Aladdin Records when he was thirteen," Sloan's reps said in a statement. "P.F. Sloan's 'Eve Of Destruction' was an anthem for a generation. It is as relevant now as it ever has been."

After recording his debut single "All I Want Is Loving" / "Little Girl in the Cabin" for the Aladdin Records label, the still teenaged Sloan got a job with music publisher Screen Gems, who hired Sloan to work with surf rock duo Jan & Dean; Sloan is heard on that group's 1964 hit, "The Little Old Lady From Pasadena." Sloan then moved to Dunhill Records, where he penned hits for artists like Herman's Hermits, the Turtles, the Searchers, the Grass Roots and Barry McGuire.

It was McGuire who was the recipient of Sloan's most enduring song, "Eve of Destruction," an ominous, apocalyptic and catchy single that prophesized the anti-war protests and civil rights movement percolating in the United States in the mid-Sixties. Despite its political undertones, "Eve of Destruction" hit Number One on the Billboard Hot 100 in 1965.

Bob Dylan once said of "Eve of Destruction," which was originally penned with the Byrds in mind, "There are no more escapes. If you want to find out anything that's happening now, you have to listen to the music. I don't mean the words. Though, 'Eve Of Destruction' will tell you something about it."

"I was a songwriter and my record label really didn't want me out there in the public," Sloan told Rolling Stone in 2014. "The label thought if I knew how popular I was, I'd want more money. I was literally destroyed three months later. The label told me to sign away everything I'll ever earn and earned and sent out word that I was persona non grata. They wanted to destroy me and this kind of music. They thought Bob Dylan was an idiot and a communist. "

Sloan was also a singer in his own right, recording a pair of albums of Dunhill (1965's Songs of Our Time, 1966's Twelve More Times) alongside a handful of other solo LPs spread across the past decades. However, after branching out on his own, Sloan claimed the music industry shunned him. "I wasn't taken seriously as a talent," Sloan told American Songwriter. "Except by Dylan. Dylan told me that the word was out and they were out to destroy me." In 2014, Sloan released his last album My Beethoven as well as his memoir, What’s Exactly The Matter With Me?.

Sloan took part in the Fantasy Fair and Magic Mountain Music Festival, the first ever rock music festival that took place in the Bay Area in June 1967, a week before the Monterey Pop Festival. The singer-songwriter was also the subject of a song titled "P.F. Sloan," penned by fellow songwriter Jimmy Webb.