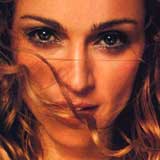 Madonna has hinted she once kissed Michael Jackson in a teaser for her Carpool Karaoke appearance. The footage will air on The Late Late Show with James Corden on Wednesday night, but a sneak peek was released on Tuesday, much to the delight of fans.

In the clip Madonna can be seen at her eccentric, best as she and James listen to some of her most famous tracks while driving around New York. One of the most scandalous moments however comes when James questions Madonna about her friendship with late singer Michael.

"What was a night out with Michael Jackson, or a night in?" James asked.

Grinning, Madonna replied, "So, you want me to kiss and tell, then, don't you?" to which James gasped, "Did you kiss?"

But fans will have to wait to see Madonna's response until Wednesday night's show. Madonna's friendship with Michael has been well documented, with the pair causing a stir when they were seen on a date at The Ivy restaurant in Los Angeles in 1991 - a week before they attended the Academy Awards together. While they dismissed rumors of a romance when Madonna was seen at an Oscars after party with former flame Warren Beatty, they remained friends.

Other notable moments in Madonna's Carpool Karaoke teaser included the 58-year-old singer showing off her twerking skills as she turned around in her car seat and wiggled her rear to the camera.

She and James also performed some of her famous Vogue moves during another singalong.

Viewers were quick to note that Madonna appears to have flouted New York's seatbelt rules by going without her strap as she was driven around the city.

Her decision was perhaps made in order to avoid ruining her outfit - a black and gold top under a leather jacket paired with tight black jeans.