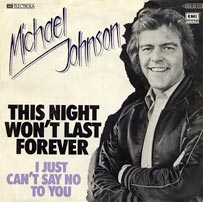 One of our favorite guests on "The Lost 45s," Michael Johnson, a Minneapolis-based singer-songwriter and guitarist known best for his first Top 40 hit song “Bluer Than Blue” in 1978, died Tuesday, July 25, 2017, in his Minneapolis home, according to a statement posted on his official website. He was 72.

The cause of death was not released, but the statement said that he died “after a long illness.” The singer underwent successful quadruple bypass surgery in August 2007.

Johnson was born Aug. 8, 1944, in Alamosa, Colorado. He grew up in Denver and started playing guitar at 13. His education at Colorado State University was interrupted, however, when he won an international talent contest in 1965. First prize was a deal with Epic Records. The company released his first self-penned single, “Hills,” and Johnson began performing to receptive crowds in clubs and at colleges.

According to his website, Johnson sought to improve his guitar-playing skills in 1966 by traveling to Barcelona, Spain, and studying with the classical guitarists Graciano and Renata Tarrago.

After returning to the U.S., he joined a group called the New Society. In 1967, he joined the Chad Mitchell Trio, which included the future superstar John Denver. Johnson was with the group for about a year.

In 1971, Johnson signed with Atco Records. His debut album, “There Is a Breeze,” came out in 1973. Five years later, he signed with EMI America, the label that would release his first Top 40 hit and subsequent hits. He would go on to release five albums with EMI before shifting to RCA Records.

At RCA, Johnson’s honey-toned voice attracted a country music following as well. In 1986, he reached No. 1 on the U.S. country chart with “Give Me Wings.” The following year, Johnson had another No. 1 country hit with “The Moon Is Still Over Her Shoulder.” In all, he had five songs reach the top 10 on the country chart.

Of his best-known song, “Bluer Than Blue,” Johnson once said he was pleased that pop music fans loved the song so much.

“I thought ‘Bluer Than Blue’ was slightly too mature for the type of audience the record company believed it was going to affect,” Johnson said in a 1978 magazine interview. “I’m glad that I was wrong.”