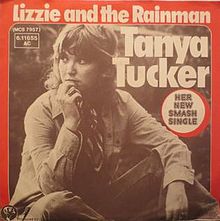 Country star Tanya Tucker has written an emotional tribute to her late ex, Glen Campbell, a week after his death.

The singer dated the Rhinestone Cowboy star when she was in her 20s, back in the early 1980s, and admits she has always loved him.

In the new issue of Closer magazine, Tucker pours out her heart for Glen, who died on August 8th, aged 81, following a seven-year battle with Alzheimer's disease.

"I first met Glen when I was 15 in the mid-'70s at the CMA Awards, then again a few years later in Las Vegas at the Desert Inn," Tanya writes.

"We had a great run. We did a lot of traveling - he took me to Europe. We kissed under the Eiffel Tower. Glen always said if you kiss under the Eiffel Tower, you get to come back 20 years later with the same person. We had some of the best times, and those are the memories I hang on to now."

"I have regrets, but it is what it is," she adds. "I tell my kids now, 'If you love somebody, don’t pick up and leave them'. I said I’d always love Glen, and forever ain’t over. I’ll never get over him."

Tanya has also released a musical tribute to her ex, and a portion of the proceeds from the sale of Forever Loving You will benefit the Alzheimer’s Foundation of America.

The singers spent 14 months together and often made headlines for their frequent fights, fueled by heavy cocaine use.

"There were some ups and downs and, of course, all the downs were played out in the press. We both got past all that,” she told Taste of Country last week. “Forgiveness is a wonderful thing. It’s why I’m releasing Forever Loving You in memory of Glen and for all of those who are losing or have lost someone they love. I’ll forever love you, Glen."