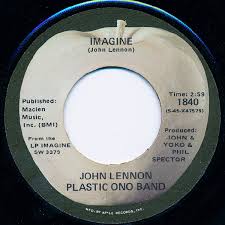 “[My husband] wrote Imagine as a song calling for peace around the world. Today, we need peace more than ever… Imagine. Together we can make peace happen. Then the world truly will live as one” – Yoko Ono Lennon

Thousands of people around the world - from Iceland to Brazil - have joined a call for peace and solidarity to celebrate John Lennon’s iconic Imagine lyrics, which have been published for the first time as a children's picture book on the UN’s International Day of Peace: September 21st.

Amnesty International has teamed up with Yoko Ono Lennon, renowned French illustrator Jean Jullien and Frances Lincoln Children’s Books to create a new picture book - which will be published in 15 languages - to inspire future generations to imagine our world full of freedom, equality and kindness.

In a foreword for the book, Yoko has highlighted how the Imagine lyrics are still as important and relevant today as when they were written. Her call for peace has been echoed by more than 4,500 people around the world, who have added messages of peace to a website, www.imaginepeacebook.com, in an online global act of solidarity.

“This book is very special to me. The words were written by my husband John and it makes me so happy to see them illustrated in this beautiful book. He wrote Imagine as a song calling for peace around the world. Today, we need peace more than ever, so I think his words are still very important.

“Everybody wants to feel happy and to feel safe. And we can all help make the world a better place in our own way. We should always keep love in our hearts and look after one another. We should always share what we have, and we should stand up for people who are not being treated fairly.

“And it’s important that we treat everyone like that, not just our family and our friends. We should treat everybody the same, no matter where they are from or if they speak a different language. After all, the pigeon in this book welcomes all the other birds, whatever color of feathers or shape of beak they have.

“By doing this, we can all help to make a difference every day. Every small good thing that we do can help change the world for the better. You can do it, I can do it, we all can do it.

“Imagine. Together we can make peace happen. Then the world truly will live as one.”

UK schools have also been taking part in Amnesty activities based on the Imagine picture book to mark the International Day of Peace, including writing peace messages on bunting shaped like the birds in Jean Jullien’s illustrations.

“Nearly half a century after it was first recorded, Imagine’s vision of a peaceful world without conflict, greed or hunger is as relevant as ever.

“John and Yoko’s dream of people standing up for what they believe in and breaking down barriers is something we strongly admire at Amnesty International. We know that when people come together with a shared vision, they can change things for the better.

“We’re delighted that this wonderful book will encourage children around the world to have fun imagining a better future for them and their own children.”

Celebrities and public figures including Richard Curtis, Juliet Stevenson and Hollie McNish have pledged their messages of peace on the website. Authors and former Children’s Laureates including Malorie Blackman, Michael Morpurgo and Chris Riddell have also given their support to the book.

Film director Richard Curtis has written: “It was John Lennon who inspired me to join Amnesty when I was 15. Forty-five years later I realize more and more how brave and muscular his battle against war was. The world is getting better. Poverty, hunger, disease, injustice are all on the run. But it is war, war, war that is slowing down the process. If we gain peace - everything else wonderful will follow.”

Actor Juliet Stevenson’s message is: “This book is a beautiful visual version of John Lennon’s cry for peace and harmony. Its message for humanity has never been more urgently needed than now.”

Poet and spoken word artist Hollie McNish writes: "I hope that one-day peace makes more money than war and destruction so that it will be on the most powerful people’s global agendas instead.”

Children’s author Michael Morpurgo said: “Never have we all, child and grown-up child, needed this more, the words and the song in our hearts, lifting our spirits, giving us hope, and determination too to find the road to understanding, conciliation and peace.”

The book can be purchased from book shops and the Amnesty Shop. Royalties from the sale of this book will be donated to Amnesty International.