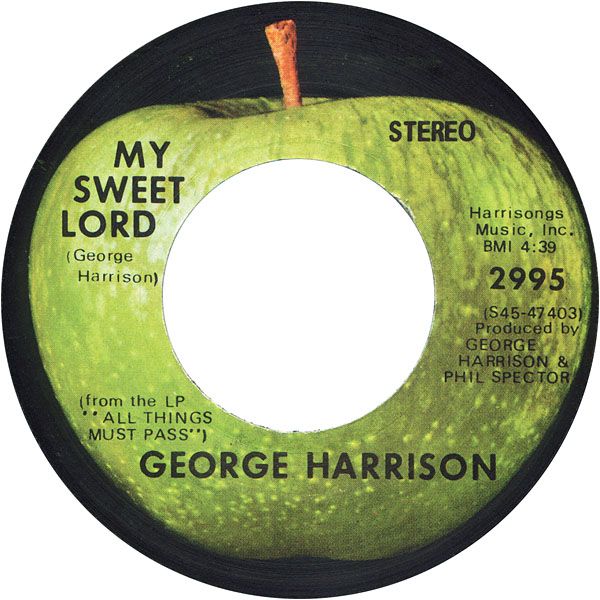 Music licensing company PPL has produced a Top 20 chart of the most played tracks in the 21st century released by Apple Records to celebrate the 50th anniversary of the record company founded by The Beatles. Apple Records released its first ever single in the UK, The Beatles’ ‘Hey Jude’ on 30 August 1968.
George Harrison’s 1970 Official UK Singles Chart Number One, ‘My Sweet Lord’, takes the top spot, receiving more airplay than any of The Beatles’ tracks released on Apple Records including the hit singles ‘Hey Jude’ (Number Three), ‘Let It Be’ (Number Four) and ‘Get Back’ (Number Six). ‘My Sweet Lord’ also reached Number One in the Official UK Singles Chart in 2002 following Harrison’s untimely death the year before.
Elsewhere in the chart, John Lennon’s ‘Imagine’ also charts above any Beatles material, coming in at Number Two. There are two other Lennon solo releases in the chart; ‘Jealous Guy’ (Number 15), later covered by Roxy Music and ‘Instant Karma! (We All Shine On)’ (Number 17). Similarly, Paul McCartney and Wings also have three entries inside the Top 20; ‘Band on the Run’ (Number Five), ‘Live and Let Die’ (Number Nine) and ‘Jet’ (Number 10).
The two only non-Beatles artists to feature in the Top 20 are Mary Hopkin with her Paul McCartney-produced 1968 Official UK Singles Chart Number One single ‘Those Were The Days’ (Number 19) and Badfinger who complete the chart with ‘No Matter What’ at Number 20. The record company releases a diverse range of music and other artists on its roster includes The Modern Jazz Quartet, Billy Preston, Ravi Shankar, The Sundown Playboys, James Taylor and Doris Troy.
The fact that Beatles tracks make up over half of the top twenty – one of which, ‘Revolution’ was a B-side and three of which are originally album tracks – is testament to the sheer quantity of The Beatles’ repertoire and also their ongoing popularity. It is also a timely reminder, with National Album Week approaching, of the power of the album.”
The most played Apple Records tracks of the 21st century
1.) ‘My Sweet Lord’ – George Harrison
2.) ‘Imagine’ – John Lennon
3.) ‘Hey Jude’ – The Beatles
4.) ‘Let It Be’ – The Beatles
5.) ‘Band on the Run’ – Paul McCartney and Wings
6.) ‘Get Back’ – The Beatles
7.) ‘Here Comes The Sun’ – The Beatles
8.) ‘Something’ – The Beatles
9.) ‘Live and Let Die’ – Paul McCartney and Wings
10.) ‘Jet’ – Paul McCartney and Wings
11.) ‘The Long and Winding Road’ – The Beatles
12.) ‘Back in the U.S.S.R.’ – The Beatles
13.) ‘Come Together’ – The Beatles
14.) ‘Revolution’ – The Beatles
15.) ‘Jealous Guy’ – John Lennon
16.) ‘The Ballad of John and Yoko’ – The Beatles
17.) ‘Instant Karma! (We All Shine On)’ – John Lennon
18.) ‘While My Guitar Gently Weeps’ – The Beatles
19.) ‘Those Were The Days’ – Mary Hopkin
20.) ‘No Matter What’ – Badfinger

Former Journey star Steve Perry made sure he had the blessing of George Harrison's widow before he added his version of the former Beatle's I Need You on his comeback album. The singer first heard the track years ago and always dreamed of reworking it as an R&B tune, but he wanted to make sure Harrison's family was OK with his rendition before going public with it, and recruited Tom Petty's former drummer Steve Ferrone to help him. "I heard […]