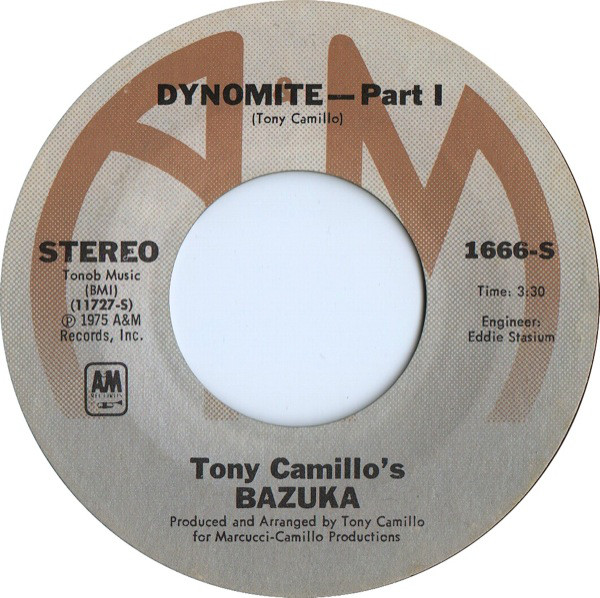 Hear Tony say hello on “The Lost 45s!”
Tony Camillo, the creative force behind numerous soul, R&B, funk, rock and disco hit records in the 1960s and ’70s, died in Hillsborough, New Jersey, on Aug. 29. He was 90.
Camillo is best known for arranging, producing and recording “Midnight Train to Georgia” by Gladys Knight and the Pips, which won the 1974 Grammy Award for Best R&B vocal performance by a duo, group or chorus. His recording credits also include songs released by Stevie Wonder, Freda Payne, The Supremes, Martha Reeves, Dionne Warwick, The 5th Dimension, Grand Funk Railroad, George Clinton, The Chambers Brothers, Barry Manilow and The Isley Brothers.
Camillo made a name for himself in Detroit in the ’60s, first at Motown Records and then with the legendary songwriting team of Holland-Dozier-Holland, arranging a number of hit songs, including “Band of Gold” by Freda Payne, “Want Ads” by The Honey Cone and “Give Me Just a Little More Time” by Chairmen of the Board.
In 1971, he built his own state-of-the-art recording studio in his Hillsborough home. He formed TC Productions and established his own label, Venture Records. It was during that time he met Tony Orlando, who was producing a project with a not-yet-famous Barry Manilow. For the arrangements, he turned to Camillo, who also introduced him to a group of young women who would later join Orlando as his backup singers, Dawn. The two Tonys became lifelong friends.
“I loved this man,” says Orlando. “He was the most multi-talented, musician, arranger, producer. He was one of the best on the planet. He was a game-changer. But Tony was greater than the songs he produced. His smile spread for miles; his heart was too big to be measured.”
Soon after, Camillo was introduced to Knight, who had also recently left Motown and signed with Buddha Records. Following “Midnight Train’s” massive success, Camillo co-wrote and produced Knight’s “I Feel a Song,” which JAY-Z and Kanye West sampled in 2011’s “Why I Love You.” In 1975, he wrote, arranged, produced and recorded “Dynomite,” a Top-10 hit by Bazuka.
After a tour of duty in Germany with the U.S. Army, Camillo attended Juilliard and graduated with a degree in trumpet and composition. From there, he earned a master’s degree and Ph.D. in composition and conducting at Columbia University under the tutelage of Leonard Bernstein and Erich Leinsdorf. Camillo was, however, attracted to popular music and took his classical symphonic training to that industry.
He formed a partnership with engineer Tony Bongiovi, a talented engineer who had a recording studio in Raritan, New Jersey. The two soon built a recording studio, which they called Venture Sound, in Bound Brook, New Jersey. Within a year, Venture Sound merged with a 12‐track New York studio, Apostolic Sound. Shortly afterward, both Camillo and Bongiovi were off to Motown, which proved to be the launching pad for both of their careers. Bongiovi recalls working with Camillo and Holland-Dozier-Holland at an exhilarating, whirlwind pace. “I remember we cut ‘Band of God,’ ‘Give Me Just a Little More Time’ and a few other songs in a couple of days.”
Camillo is survived by ex-wife, Millie; his sister, Kathryn; two daughters, Allaine Kasmi and Toni Codd; four grandchildren and one great grand-daughter.

Cher had to turn her back on her Hollywood dream after she was struck down with the energy-sapping Epstein-Barr virus. The pop superstar fought hard to be taken seriously in show business, but after a series of big screen hits in films like Silkwood, Mask, The Witches of Eastwick, and Moonstruck, she had to step back and focus on her health. "I got really sick," she tells the New York Times. "For two years, I couldn’t work. It was terrible. […]